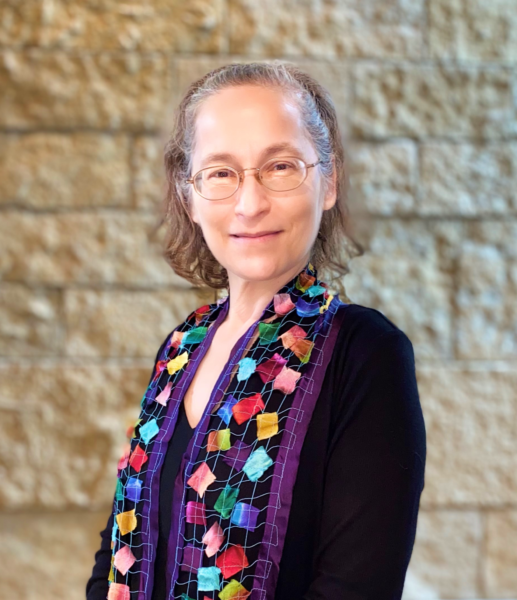 
Abby grew up in the Bronx, NY in a musical and Jewishly-involved family. Part of her formative years included listening to records such as Debbie Friedman’s “Sing Unto God.” She found her niche and her love of spreading the joy of Jewish music as a songleader and youth leader in Reform Jewish youth groups (WeFTY/NFTY) and at camps Eisner and Kutz. As a teen she taught music in her synagogue’s religious school and served as head songleader at Shwayder (CO) and Greene Family Camp (TX), and as the music director at Paul Newman’s Hole in the Wall Gang Camp (CT) for children with life-altering and life-endangering illnesses.

In her undergraduate years at Yale University, Abby started the first Jewish singing group on campus, Urim v’Shirim. She also led music for Shabbat and High Holy Days for Reform Jewish Students at Yale. At Yale she had amazing Hebrew professors who taught much of their lessons through popular Israeli music!

After college, Abby moved to Austin, TX where she met her husband and became the cantorial soloist and music teacher at Congregation Beth Israel. In 1997 she and her husband moved to Boston, where she served Congregation Sha’aray Shalom in Hingham, MA and gave birth to two sons (who are now grown and flown and each making their own beautiful music)!

Abby had composed music in her head for many years but had never studied music formally until age 35, when she felt compelled to learn how to notate music in order to spread her music farther than her local reach. She has been blessed in the past decade or so to have had several of her compositions published by Transcontinental Music Publications as octavos or in Shabbat Anthology volumes, and others in WCN’s Kol Isha compilation and Shalshelet’s 2010 Festival Songbook, as well as to have her pieces presented at numerous ACC/GTM and WCN conferences, the Shalshelet International Festival of New Jewish Liturgical Music, and by Chorus Austin. She has created commissioned compositions for the URJ’s Joint Commission on Worship, Music and Religious Living (Vayarotz Likratam), WCN (L’chu N’ran’na), Shalom Austin (Tapestry), and for private commissioners (Kol Yeled – the Blessing of Each Child and Ozi V’zimrat Yah).

Currently Abby serves as cantor at Temple Beth Shalom in Austin, TX, where she has served since 2004. She holds cantorial ordination and a Masters in Jewish Sacred Music from the Academy for Jewish Religion, California. She is a past Vice President of Membership for the GTM.