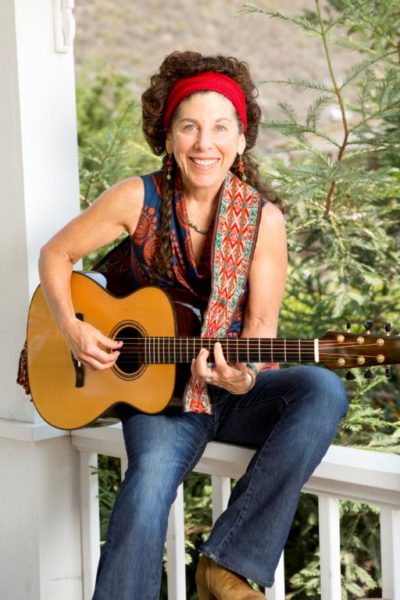 Cantor Alisa Fineman is a recent graduate of the HUC DFSSM Cantorial Certification Program. She serves Congregation Beth Israel in Carmel, California. Alisa is a composer of folk and Jewish music.

Alisa Fineman grew up in California’s San Fernando Valley, born to a family rich in musical heritage. Her great grandfather played first trumpet with the New York Philharmonic under the legendary Toscanini. Her grandmother, a concert pianist, gave Alisa her first piano lessons. At the age of eleven Alisa began learning guitar, and a year later she was writing her first songs. Early inspirations, both musically and lyrically, include Joni Mitchell, Odetta, Willa Cather, Kate Wolf and Mary McCaslin. As with these artists, Alisa’s repetoire of songs speak of love, of a sense of place and an appreciation for the earth’s beauty and fragility, and of life’s sometimes-difficult choices.

While studying Environmental Studies and Natural History at the University of California at Santa Cruz, Alisa spent her summers as a fire lookout in the wilderness of Idaho’s Salmon National Forest, and after graduation she moved to Big Sur to help manage the University of California Big Creek Reserve. During this period of her life, while living in almost complete seclusion, she began writing the songs which in 1988 would become Cup Of Kindness, her first recording.

The enthusiastic response to Cup Of Kindness motivated Alisa to devote herself more fully to writing and performing. Her growing connection with the music community soon led her to become host to a radio show on KAZU in Pacific Grove, CA which showcased fellow singer/songwriters from around the country. She was voted “Best Folk Musician” four years running by the Monterey Bay’s Coast Weekly and in 1991 she won top honors at the Kerrville Folk Festival’s NewFolk Showcase for her songs, One Lone Bird and I Could Not Ask For More, both of which were included on her 1993 release, Better With Time.

Since then, Alisa has toured extensively, appearing at such festivals as California’s Strawberry Festival, the Napa Valley Festival and the Kate Wolf Memorial Festival, Austin’s South-By-Southwest, The Kerrville Folk Festival, Moab Folk Festival, The Connecticut Family Folk Festival, and Spokane’s Columbia River Festival. Later joined by singer-singer and multi-instrumentalist Kimball Hurd (co-founder of City Folk), both have enjoyed performing together at a variety of these festivals and venues around the country. Alisa has also performed at the National Songwriter’s Academy showcase at The Troubadour in Los Angeles and in the Treestar Concert Series in New York. In 1992 and ’93 she was Artist-In-Residence at the Omega Institute for Holistic Studies in Rhinebeck, NY. In addition, she and Kimball were former members of guitarist Martin Simpson’s highly acclaimed Band Of Angels and Alisa was a frequent guest-artist at performances by Trapezoid founder Paul Reisler.

Alisa’s CD,Closing the Distance: Poems, Prayers and Love Songs, featuring contemporary arrangements of traditional and original songs from the Jewish Diaspora, marks a radical but natural departure from Alisa’s previous recordings, and a new direction for her musical and humanitarian sensibilities. Her long-time love of Jewish and world music began at the summer camp she attended through her teens and a work/study experience on a kibbutz in Israel; and on this CD, produced and co-arranged by Alex de Grassi, Alisa sings in Hebrew, Ladino, and English with two guest vocalists, Elias Lammam and Shabda Kahn, singing in Arabic. Set against a mixture of Middle Eastern and Western instrumentation, the arrangements draw from a broad base of traditions that explore the roots of Alisa’s cultural heritage. Amidst international praise for this CD, her rendition of Flory Pagoda’s Chanukah song “Ocho Kandelikas” was included on Putumayo’s “A Jewish Celebration” and Barnes & Noble’s “A Chanukah Celebration,” while her own compositions  received recognition at  Shalshelet 4th International Music Festival in 2010.

Those who have followed her career see it as the logical extension of Alisa’s musical journey of discovery. She was a member of the vocal and instrumental ensemble, Ya Elah!, a spiritual and interfaith ensemble endeavoring to inspire unity through sacred text. For many years she was increasingly called upon to contribute her talents as a cantorial soloist at celebratory events and at several synagogues in Northern California, eventually accepting a position at Congregation Beth Israel in Carmel, CA. In 2014 she was accepted at New York’s Hebrew Union College long distance Cantorial Certification Program from which she will graduate in May 2018.