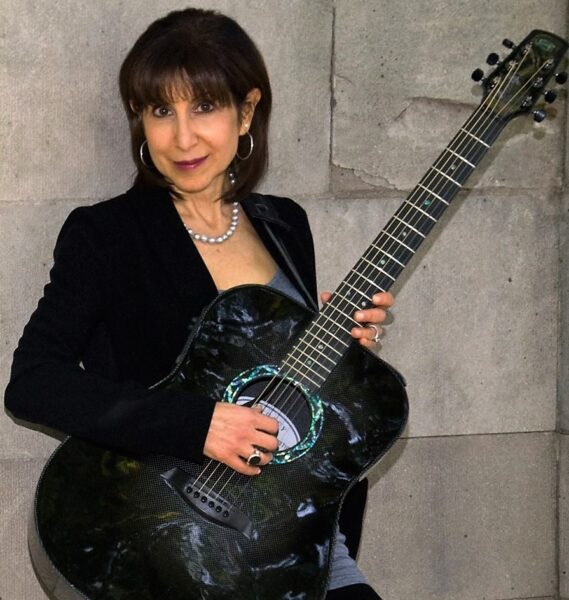 
All About Rebecca Schwartz

Rebecca grew up in the city and suburbs of Philadelphia. A child who loved to sing, she enjoyed choirs at an early age and studied piano, then moved to guitar as her main instrument. At 16, she composed her first song and began writing two collections of poetry, turning many of them into songs she doesn’t remember. Rebecca also began songleading and studied at (then UAHC) Kutz Camp in the summer of 1975, returning to teach and lead services at local Philly temples.

Teaching guitar and working in bars and restaurants to pay the bills, Rebecca left the world of Jewish music to become a wedding singer, married, had two sons, and returned to Jewish music when she volunteered to play guitar at a women’s seder at her temple. This led to worship-leading opportunities, which turned into writing music to Jewish text and studying Hebrew at Gratz College.

Rebecca served as Songleading Director at URJ Crane Lake Camp for eight summers (2005 – 2012) and then spent four summers as Rosh Shirah at Ramah Day Camp Philly (2013 – 2017). While beginning as the music teacher and choir director at Congregation Kol Ami (Elkins Park, PA) in 2006, she’s served as their full-time Cantorial Soloist and Music Director since 2008. Rebecca has studied with numerous rabbis, cantors, and private mentors and has no formal degrees, but lots of life experience and no regrets.

Rebecca’s favorite thing in the whole world (aside from being a mom) is teaching people of all ages. “The gratification of molding little minds or giving adults that “ah-ha!” moment is exhilarating.” She specializes in teaching guitar to clergy members. In fact, Rebecca taught a highly engaging Guitar Workshop for GTM’s Guild Talks Music series. She also serves on the board of the Women Cantors’ Network. Her husband, Joel, keeps telling her to retire, but has had no luck convincing her so far!