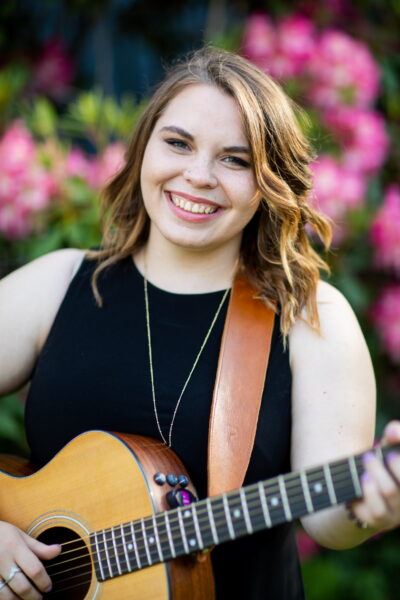 
Getting to Know a Bit about Rose Snitz

Rose grew up in Tulsa, OK, attending the Jewish day school through elementary school and was heavily involved in the Temple Israel community, the third generation to grow up there. She attended the religious school and Jr Choir, later becoming a teaching assistant and joining the adult and High Holy Day choirs, as well as songleading alongside the Cantor and Temple band.

When old enough, Rose started attending Green Family Camp in Bruceville, TX, and went to Israel with them on their NFTY in Israel trip. She became incredibly involved in NFTY nationally and regionally in the Texas-Oklahoma region. Rose was on the TYG (Temple Youth Group) at Temple B’nai Israel in Oklahoma City and a regional songleader. In her sophomore year, she got more involved on a national level, attending the songleading NFTY weekend, Nashir, founded by Alan Goodis and Cantor Jeff Klepper. Between camp (GFC and Kutz Camp), her Temple’s music culture, and Nashir, is where Rose really developed and cultivated her love for songleading and worship leading. Rose felt like she really found a niche of teaching, helping others, music, and creativity. “NFTY, Nashir, GFC, and Kutz helped me feel like I had a place and was heard”.

In 2014, Snitz moved to New York City and started creating a life in Brooklyn. Once she started songleading and honing her skills through Nashir, and later Hava Nashira, she never really stopped. In the nearly 7 years in Brooklyn, Rose worked in many different roles and really expanded her knowledge and experience as a Jew in Reform, Progressive, Reconstructionist, and Pluralist/Non-Denominational communities. She served as youth group advisor, Hebrew/Jewish Studies teacher, songleader, t’filah coordinator, and cantorial soloist roles across a wide range of communities in the NYC area.

“I still can’t believe I have a song published, let alone in TMP’s Ruach series. It’s seriously a dream! I grew up looking at sheet music from these books in Jr Choir”, says Rose.

She begged her parents for a guitar when as a young kid, and one Hanukkah they bought her one and set her up in lessons. She lasted exactly one month before quitting because “it was too hard,” and “it hurt my fingers too much.” Fast forward to 8th grade: She needed an outlet, and saved up babysitting money, and bought a $90 used blue sunburst Ibanez at the local pawn shop and started teaching herself. Rose took it to camp and signed up for a guitar elective. She can still remember one of the songleaders, Dan Lee, teaching her, her first real chords.

Rose really resisted writing anything of her own, saying, “No, I’m not a songwriter, I’m not good enough.” To which her Cantor and other mentors said, “No no, just try it!”  Rose mentions, “I don’t really remember what the switch was for me, but at some point, I think my therapist told me to try sitting with my guitar and just sing out what I was struggling with”.

Fast forward over a decade later, and her main songwriting practice stems from audible journaling. Rose’s “L’dor Vador” is a prime example of this, and it almost didn’t make her album. In Rose’s words, “I was feeling extremely frustrated with the state of the world and our US politics and just at a loss. I kept thinking, we say ‘from generation to generation’ all the time, but really, what exactly is it that we’re leaving”?

Anyone remotely close to Rose knows that her two-year-old niece and four-year-old nephew are huge parts of her life. Her nephew was born the day before the 2016 election, and her niece was born in the middle of that historic timeframe. With every new headline, every report of another mass shooting, another school lock down, Rose just keep thinking about her students, niece, and nephew, and feeling at such a loss for the world we’re living in and the generation after her already being forced to stand up for itself in the ways like Greta Thunberg and X González have been.

Rose’s album can be streamed everywhere or purchased on her website: rosesnitz.com.

Empowering Others to Be Empowered

Over the years, in addition to music and community building, Stiltz found a love for all things logistics and really empowering others to feel empowered. One of her jobs, held for 5 and a half years, was working with fellow Jewish musician, Noah Aronson. Over the years, Rose worked as his tour manager, publicist, assistant, and it grew over time. In addition to managing his busy tour calendar, she got to develop and hone her skills running events, logistics of video shoots, conferences, album releases, graphic design work, etc.

On June 18th, Rose launched Snitz Consulting, where she’ll be offering productivity and getting-organized coaching and managerial consulting. These offerings are for everyone . . . people who feel overwhelmed with all the different platforms to store data, music files, etc., or how to manage their email inbox. When you feel in control of your files, email, notes, and any other everyday data you use, it opens up a whole new level of productivity. You’re able to have a system set up to make everything seamless. Her managerial consulting, is for people who maybe want to launch a new project but don’t know where to start and are feeling stuck. It’s for people who maybe don’t have a budget for hiring an assistant or a logistical manager, but need help building a system or tricks on how to stay on top of their projects and gigs. And it’s for so much more. Find out more here: snitzconsulting.com.