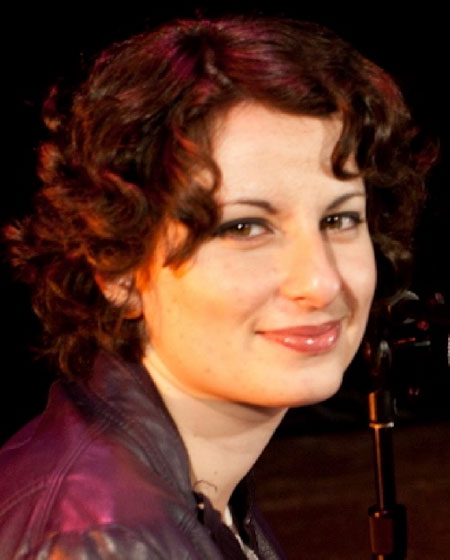 Asia Meirovich, a 31-year old composer, singer/songwriter, and pianist, has won the Guild of Temple Musician’s Ben Steinberg Young Composer’s Award for 2015. Ms. Meirovich, a graduate of the Berklee College of Music and the University of Massachusettes, Amherst, won for her choral composition of “Ahavat Nafshi “(him whom my soul loves), the third movement in a larger piece, “Al Ahava VeAfar” (on love and dust). Ms. Meirovich receives a $1,500 cash prize and will have her composition premiered at the ACC/GTM Convention taking place this year in Ft. Lauderdale, Florida, June 28-July 2.

Born in Russia, raised in Israel, and currently moving between New York City, Boston, and Western Massachusetts, Ms. Meirovich has dedicated her herself to the full range of musical expression and creation. In 2001, she graduated from the Rubin Conservatory of Music and Dance in Jerusalem (High School) where she focused on classical piano and choral singing. In 2005 she received her Bachelor’s degree in Contemporary Writing and Production from the Berklee College of Music. For several years she worked as a rock and contemporary musician before attending the University of Massachusetts, Amherst, to receive her Masters in Composition where she began to work on larger, more classically based compositions.

Ms. Meriovich’s work and awards reflect the broad range of her interests and talents. She has been honored by both the Portico Dans Theater and the Contemporary Japanese American Music Festival (CJAM) by having her scores selected for 2014. She currently serves as Music Program Director at the MacDuffie Prepatory School in Western Massachusetts and is also on the Faculty at the BIMA Jewish summer arts program at Brandeis University.

For her work, “Ahavat Nafshi,” Ms. Meirovich used texts from Song of Songs as a reflection of the circular nature of life, love, and death. She states, “This movement is an intense, lonely and obsessive search for love. The words and musical ideas overlap as a collage in different combinations like restless thoughts. The music grows more intense and dissonant until reaching the final words “velo arpeno” – and I will not let go.”

She also found the work very meaningful, saying, “I took great care in choosing text, finding passages that seemed universal and timeless, regardless of background and religion. I love working with the source and original text, and setting something so ancient with a personal musical language.”

David Shukiar, GTM Vice President of Special Programs and head juror for the award, praised Ms. Meirovich’s work by saying, “The jury liked the fresh tonal language and rhythmic vitality of Asia’s piece. We especially liked the interplay of voices, the rhythmic interplay and overlapping of voices that creates intriguing textures and relationships.” Mr. Shukiar currently serves the congregation of Temple Adat Elohim in Thousand Oaks, CA as Cantorial Soloist, and is himself a two-time winner of the award. He adds, “We expect to hear big things from Miss Meriovich and look forward to all she will contribute to Jewish music.”

Mr. Shukiar was joined on the selection committee by Cantor Jonathan Comisar, a noted composer of Jewish liturgical music currently serving on the faculty of the Hebrew Union College in NY teaching music theory, liturgy and composing/arranging while also pursuing his graduate degree in Music Composition at the Manhattan School of Music. He is joined by Paul Richards, the 1996 winner of the YCA award now Professor of Composition at the College of Fine Arts at the University of Florida. The third member of jury is Meira Warshauer, a multi-award winning composer and educator who has served on the faculties of Columbia College and the University of South Carolina Honors College,